skip to main | skip to sidebar

it's bee a rough couple of weeks.

my grandma passed away on March 4th and i am still trying to process it. i wrote a few blog drafts but never felt quite right. there was all this commotion leading up to it, during the funeral and then even after.

jared moved to nj and it's going really well with the exception of his mean cat. i am so lucky to have someone who loves me so much that he'll move to another time zone to be with me.

then... yesterday i found out that my friend, steve king, was killed when he was struck on his motorcyle after a guy ran a stop sign in LA. 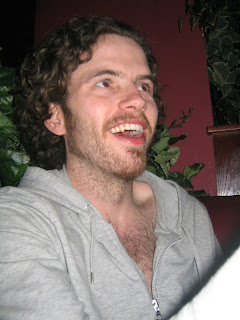 i guess this is life... really tough stuff and then really great stuff mixed in. either way, i feel really sort of numb. it's like sensory overload. i want to crawl back in bed and cry but then again i am not sure i actually would.

alpha found his obit online here - and yes, alpha, it doesn't do him justice.

it's not quite how i would explain steve.
there was never a dull conversation.
never a dull moment.
there was something restless and yet embracing about his spirit. all my memories of him are intense; that's just how he was.

last night on my way home i listened to Born to run. it was an album i think i introduced him to when i first met him three years ago on my birthday. we were in the car on the way down to AC. it's like i could see it change him. we listened to it on vinyl when we got back to montclair. the album always meant a lot to me since i remember listening to it with my dad... but now it just makes me think of him.

this song in particular.... 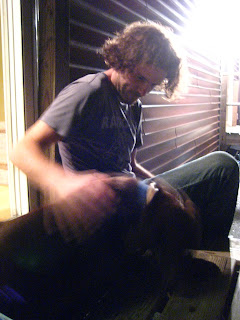 Well the maximum lawman run down flamingo chasing the rat and the barefoot
Girl
And the kids round here look just like shadows always quiet, holding hands
From the churches to the jails tonight all is silence in the world
As we take our stand down in jungleland

The midnight gangs assembled and picked a rendezvous for the night
Theyll meet `neath that giant exxon sign that brings this fair city light
Man theres an opera out on the turnpike
Theres a ballet being fought out in the alley
Until the local cops, cherry tops, rips this holy night
The streets alive as secret debts are paid
Contacts made, they vanished unseen
Kids flash guitars just like switch-blades hustling for the record machine
The hungry and the hunted explode into rocknroll bands
That face off against each other out in the street down in jungleland

In the parking lot the visionaries dress in the latest rage
Inside the backstreet girls are dancing to the records that the d.j. plays
Lonely-hearted lovers struggle in dark corners
Desperate as the night moves on, just a look and a whisper, and theyre gone

Outside the streets on fire in a real death waltz
Between flesh and whats fantasy and the poets down here
Dont write nothing at all, they just stand back and let it all be
And in the quick of the night they reach for their moment
And try to make an honest stand but they wind up wounded, not even dead
Tonight in jungleland
Posted by nicole marie at 4:14 PM 2 comments

nicole marie
montclair, nj, United States
i am a jersey girl working her magic and trying to live a more creative life. i just changed careers and am now working as an assistant to an interior designer and teacher yoga.